Oh, the Humanity! Why ‘Animal’ is a Dangerous Label As I write this, the internet is abuzz over comments by President Donald Trump referring to MS-13 gang members as “animals.” The comments were made during a meeting on illegal immigration. But it’s clear from the transcript that Trump was not referring to the average family that sneaks across the border in the hope of a better life, but MS-13. That’s the gang that terrorizes and murders innocents of all ages, not just in the U.S., but wherever they happen to be, including in Central America. You wouldn’t know Trump was referring to MS-13 by the way much of the media and many Democrats are responding. For them, it’s another glorious opportunity to point out how bigoted Trump is. He’s calling immigrants animals! So they tell their readers and constituents, knowing full well who he was actually speaking of.

The New York Times Twitter feed may be the most blatant: 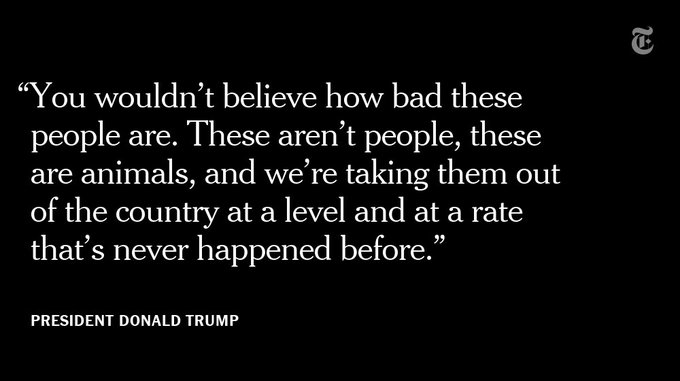 Trump lashed out at undocumented immigrants during a White House meeting, calling those trying to breach the country’s borders “animals” https://nyti.ms/2rJgCjs

But let’s put aside all that for the moment. I’m not out to defend Trump or criticize him. Instead, let’s focus on something else: the implications of calling any human, no matter their crime, an “animal.”

We’re All Capable of Evil

We’ve all done it, or thought it. When you hear about a child abuser getting caught and sent to prison. What an animal. Sex traffickers who make a profit off of buying and selling women. Animals. Terrorist organizations like ISIS that kill and torture people all over the world in the name of their religion. They’re nothing but animals. How can they not be? They’ve lost their humanity, we tell ourselves. Normal humans would never commit such atrocities.

But therein lies a danger for us.

We don’t want to live in a world where normal people could stoop so low and commit such awful acts against a fellow human being. So we tell ourselves they must have a defect.

But as humans, we are capable of stooping that low. That’s what sin is. It’s the absence of God in our lives. It’s the inherently disordered desires of our human nature taking over. That’s when horrible crimes take place. The crimes committed by those we call “animals” may be inhumane. But those who commit them are just as human as we are. Nothing can make them not human. That’s how they were created, that’s how they will die, and that’s how they’ll spend eternity, whether in Heaven or Hell.

(And if they were truly animals, we wouldn’t be holding them accountable for their crimes, would we? Their very humanity signals responsibility to hold themselves to a higher standard, and moral failure when they don’t.)

Our Personalities Don’t Determine Our Salvation

That’s not to say there aren’t some predispositions that make certain people more likely to become criminals than others. Some of us tend to be good-natured, mild-mannered, and kind. Some of us tend to be rougher, angrier and more selfish. Still others of us are born with medical conditions, like psychopathy, that make us more likely to commit crimes.

But none of that takes away our humanity. And none of that determines our eternal status — whether or not we will be saved.

We don’t want to live in a world where normal people could stoop so low and commit such inhumane acts against a fellow human being. But that’s what sin is.

The Bible reminds us that “all have sinned and fall short of the glory of God.” No, we haven’t all committed crimes as grievous as MS-13 or ISIS. Thank God. But we don’t find salvation by committing less-grievous crimes than someone else. We don’t get condemned to Hell based on how many murders we’ve committed or not committed. We’re all born with sinful hearts, and all doomed to a life of enslavement to that sin unless we call on the name of the Lord and commit our lives to Him. It’s by His grace and His goodness that we are saved, reunited with God and permitted to dwell with him forever.

Grace for the “Animals”

Even the people we call “animals” can find that grace. The Bible has some examples. King David had his soldier Uriah murdered and took his wife Bathsheba for himself, though he later repented. Still, Uriah’s friends may have thought of David as an animal. Paul persecuted Christians for their faith, before encountering Jesus himself. Surely some onlookers thought Paul was an animal for brutalizing innocent people. There are stories of Nazis and neo-Nazis, deemed animals by many for their sickening worldview and resulting actions, who later found faith in Jesus.

There are people in the world who do unimaginably horrible things. The depths of their depravity are so shocking that it’s hard for us to call them anything but “animals.” But as Christians, we should pause before using that label. That label comforts us by making us think regular humanity is not capable of such evil. But that’s a dangerous assumption. That’s exactly what regular humanity is: capable of evil, and in need of God’s grace.

Calling evil people what they are — humans — reminds us that we are susceptible to terrible sin, likely worse sin that we can ever imagine ourselves committing. And all of us, no matter how naturally “good” or “bad” we are, need Jesus in order to be saved from it.