The Church Must Be Clear: Truth is Absolute and Sinners Must Convert

Synod Reflections From Down Under: Interview With Archbishop Anthony Fisher

Among the reasons Donald Trump is president is that his natural political instincts are superior to those of any other current figure.

As campaign 2018 entered its final week, Trump seized upon and elevated the single issue that most energizes his populist base and most convulses our media elite.

Warning of an “invasion,” he pointed to the migrant caravan that had come out of Honduras and was wending its way through Mexico. He then threatened to issue an executive order ending birthright citizenship.

As other caravans began to assemble in Central America, Trump said he would send, first 5,200 and then 15,000, troops to the border. 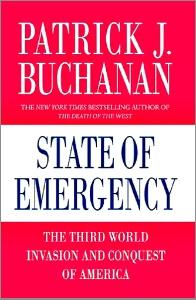 State of Emergency: The Third World Invasion and Conquest of America

This ignited the predictable hysteria of the media elite who decried his “racism,” his “lying” and his “attack on the 14th Amendment.” Trump, they railed, is sending more troops to the Mexican border than we have in Syria or Iraq.

True. But to most Americans, the fate and future of the republic is more likely to be determined on the U.S.-Mexican border than on the border between Syria and Iraq.

Moreover, in challenging birthright citizenship, Trump has some constitutional history on his side.

The 14th Amendment, approved in 1868, was crafted to overturn the Dred Scott decision of 1857 and to guarantee citizenship and equal rights under law to freed slaves and their children.

Did it guarantee that everyone born on U.S. soil is a U.S. citizen?

No. In the 1884 Elk v. Wilkins decision, the Supreme Court ruled that John Elk, a Winnebago Indian born on a reservation, had not denied his constitutional right to vote, as he was not a U.S. citizen.

Not for 56 years, when Congress passed the Indian Citizenship Act of 1924, did Native Americans become U.S. citizens.

Also, the 14th Amendment confers citizenship on those born in the U.S. and “subject to the jurisdiction thereof.” Children of foreign diplomats, though born here, are not citizens.

Most legal scholars do not think Trump can, by executive order, determine who is or is not a citizen under the 14th Amendment.

Yet should Trump issue an executive order and lose in the Supreme Court, the controversy could raise public consciousness and force Congress to enact legislation to clarify what the 14th Amendment precisely means.

Only Canada and the United States, among advanced nations, have birthright citizenship. No European country does. And the Conservative Party in Canada is moving to end it. Does it make sense to grant all the honor, privileges and rights of lifetime U.S. citizenship to anyone who can fly to the U.S. or evade the Border Patrol and have a baby?

Nor is this a small matter. The Pew Hispanic Center estimates that 6 percent of U.S. births (250,000 per year) are to undocumented immigrants.

Yet that 250,000 is a drop in the bucket compared to the total number of immigrants now coming. In 2016, President Obama’s last full year, 1.75 million legal and illegal immigrants arrived, a record.

With two months to go in 2017, the estimated arrivals of legal and illegal immigrants is 1.61 million.

Thus, in two years, 2016 and 2017, the United States will have absorbed more migrants, legal and illegal, than all the people of the 13 states when we became a nation.

According to the Center for Immigration Studies, there are 44.5 million immigrants in the U.S. today, legal and illegal, a number that far exceeds the total U.S. population, North and South, at the time of the Civil War.

While almost all of our immigration before 1965 was from Europe, only 1 in 10 immigrants now comes from the Old Continent.

Mexico, Central and South America, and the Caribbean provide a plurality of migrants, legal and illegal. They have displaced East Asia and South Asia — China, Korea, the Philippines, India — as the primary contributors to the burgeoning U.S. population.

We are assured that the greater the racial, ethnic, religious and cultural diversity we have, the stronger a nation we shall become. Whether true or not, we are going to find out.

For the European population of America, 90 percent of the country in 1965, will have fallen to about 60 percent by 2020, and whites are headed for minority status about 20 years after that.

Of America’s most populous states — California, Texas, Florida and New York — the first two are already minority-majority and the latter two are not far behind.

Yet the gaps between Asian and white Americans, and Hispanic and African-Americans — in income and wealth, crime rates and incarceration rates, test scores and academic achievements — are dramatic and are seemingly enduring.

To the frustration of egalitarians, the meritocracy of free and fair competition in this most diverse of great nations is producing an inequality of rewards and a visible hierarchy of achievement.

Politically, continued mass migration to the USA by peoples of color, who vote 70-90 percent Democratic, is going to change our country another way. Red state America will inevitably turn blue.