5 Ways to Divorce Your Smartphone in Lent… or Even After!

Msgr. Charles Pope: The Lament of God: You Forgot This should be a scandal. Pope Francis himself just welcomed Turkish President Tayyip Erdogan to the Vatican. The visit was friendly. The two leaders traded gifts. They jabbered about the status of Jerusalem. The pope said nothing at all about Erdogan’s army shelling and killing Christians (most of them Catholics) even as the meeting took place.

Yes, the Turkish Army leads al Qaeda ever deeper into Syria to “kill the unbelievers.” We shrug and turn our heads. Our hands are cleaner than Pilate’s.

The Least Among Our Brothers

The Christians in Northern Syria are foreign. Far away. Their rituals, ancient and elaborate. They pray in tongues we don’t understand. (Though Jesus would have.) So we find it easy to shrug and turn away. The “least among our brothers”? The most convenient to overlook. That might not be so bad. If they had anyone else looking out for them. Say, the Russians. Or the country’s former colonial rulers, the French. But nobody is protecting the Christians of Northern Syria. So they protect themselves. They’ve armed themselves as best they can. They’ve allied with the only force on the ground that defends religious tolerance: the Kurds.

Remember them? A Kurdish-led alliance, the Syrian Democratic Forces defeated ISIS. So U.S. troops didn’t have to. This alliance formed a free and pluralistic decentralized democracy. It’s the Federation of Northern Syria. Now Turkey is attacking it, using its regular army, and the forces of al Qaeda in Syria.

I can’t really blame U.S. Christians too much for our silence, in light of Pope Francis welcoming of Turkish President Tayyip Erdogan to the Vatican. Imagine the Orthodox Jewish leaders of Israel welcoming the Palestinian Authority, even as its rockets rained down on Jewish settlements in Samaria. You can’t, can you?

According to an official Vatican communiqué, two leaders discussed relations between the Catholic Church and Turkey, the migrant crisis and the status of Jerusalem. Prior to the meeting, President Erdogan told the Italian press that the most important issue to be discussed was the controversy over the Holy City, saying that his top priority for the talks was “the status of Jerusalem.”

Turkish media reported that the agenda for the meeting included “bilateral relations, the latest developments on Jerusalem, regional issues, the humanitarian tragedy in Syria, and the fight against terrorism, xenophobia and Islamophobia.”

“The two leaders stressed that ‘equating Islam with terror is wrong,’” reported Hurriyet Daily News, which added that Erdoğan told the pope that “Turkey values people from all religions, including Catholics, living in harmony and peace.”

Isn’t it nice that Pope Francis could find time to speak against Islamophobia? While he did, his guest’s troops rained shells on Christian towns. All to make way for al Qaeda’s murder gangs.

What did the mostly Muslim Kurds think? They’re Christians’ only allies in the region. No need to guess. Here’s what one leading Kurdish group Tweeted after the meeting: 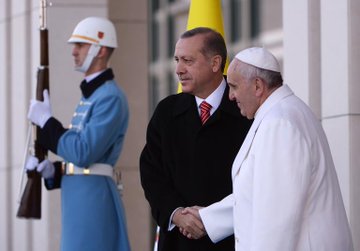 .@Pontifex You have lost all credibility from humanitarian & struggling people all over the world by meeting this bloodthirsty fascist dictator who is carrying out a very Dirty War against the Kurds. Shame on you! You have blood on your hands! #Erdogan #Italy

I can’t say that I blame them. A long list of Italian academics issued an open letter critical of Pope Francis’ meeting with Erdogan.

A Plea from Syrian Christians in Danger of Death

Here’s what the actual Christians of Syria had to say about this meeting. (Translation by The Stream’s Johannes de Jong.) This letter comes from the umbrella group the Bethnarin National Council. The note went to the Holy See before the pope’s meeting with Erdogan.

In the faith in our Lord and full of concern about the future of Christianity in the Middle East, we write this letter to you Holy Father.

We, Syriac-Assyrian Christians from Syria, Iraq, Lebanon, Turkey, Europe and the US have organized ourselves in political parties and movements in our respective countries and united ourselves at the international level in the Bethnahrin National Council (MUB).

We address His Holy Father with the utmost urgency as the Turkish army and jihadist allies are attacking Afrin and shelling Syriac-Assyrian villages in northern Syria. At 2 February last for example Turkish forces shelled deliberately the Syriac-Assyrian village Zorava. As His Holiness probably know, Afrin is of Aramaic heritage.

At the same time we want to mention that our Kurdish brothers and sisters in Christian faith who are in Afrin, have been calling the Christian world to ask for an end of the war against Afrin.

Mr. Erdogan will tell His Holiness that he is fighting against terrorists, but it is obvious that unarmed civilians are never terrorists. Furthermore, the entire world knows that our Syrian Democratic Forces defeated ISIS, the most awful terrorist organization the world has ever seen. Turkey tried to seize the last bit of property of the oldest Syriac Orthodox Monastery in the world. It is not possible in Turkey to leave Islam and have a new Church in all openness and freedom. Turkey still denies the massacres against the Christian peoples; Armenians, Syriac-Assyrians and Pontus-Greeks in 1915.

In the Federation of Northern Syria we are free and empowered as Syriac-Assyrian people. We are part of society, government and the military forces. Mr. Sanharib Barsom is Co-President of the Federation of Northern Syria is second Chairman of the Syriac Union Party of Syria – SUP. The Commander of the Syriac Military Council, Mr. Kino Gabriel, is the spokesperson of the Syrian Democratic Forces. In Qamishli a public monument remembering the Sayfo has publicly been consecrated by His Holiness Ignatius Aphrem II.

Your Holiness, Mr. Erdogan will tell His Holiness he is fighting the PKK. We ask His Holiness: are we, Syriac-Assyrian Christians PKK? Are our villages PKK? Your Holiness, we sincerely believe that Your Holiness and the vast majority of Catholic people in the world reject the Turkish violence against us. Your Holiness declared that our struggle against ISIS is just and necessary. His Holiness more than once stood up for us when our people were under attack. Please do not forget us now Turkey is trying to destroy all hope that we created regardless all darkness. Your Holiness it is our sincere hope that you will cancel your planned meeting with Mr. Erdogan. However, if His Holiness decides to meet him, we kindly ask you to tell him that this violence is terrible and unacceptable.

Our movement is always available to give representatives of His Holiness more information when required and in the faith of our Lord we wish His Holiness all wisdom in dealing with this situation.

Sadly, the Christians of Syria seem to be on their own. The same weird mix of naivete and cynicism led Pope Francis to cut a dealwith China’s Communist tyrants. So it’s up to the rest of us to speak up. While there’s still time.