A Texas bill that would outlaw abortion from conception was heard Monday in the state’s capitol. The bill is now pending in the House Judiciary and Civil Jurisprudence Committee.

The bill would grant equal protection to preborn babies as those born. H.B. 896 states, “A living human child, from the moment of fertilization of a human spermatozoon with a human ovum is entitled to the same rights, powers, and privileges as are secured or granted by the laws of this state to any other human child.”

Mark Lee Dickson is a pastor and the director of Right to Life East Texas. He said Monday night that “hundreds of abolitionists are here at the capitol in Austin, Texas, for the first hearing of a bill, ever, that would abolish abortion in a state in our nation.” 446 people registered to testify for the bill, 54 registered to testify against the bill.

The committee heard 50 bills. They saved H.B. 896 until the very end. While waiting, Dickson and other pro-lifers sang “A Mighty Fortress is Our God” and “Amazing Grace.” They went to their knees and prayed in the capitol’s rotunda to end abortion. “To pray to our Creator, the one Who forms us in the womb, in that rotunda was just a very powerful, powerful experience,” Dickson told The Stream.

Around 330 people testified at the hearing, a spokesperson for Arlington Republican Rep. Tony Tinderholt, co-author of the bill, said to The Stream. The hearing lasted into the early morning hours of Tuesday, finally wrapping up around 3:00 a.m.

Not All Pro-Lifers Agreed

While Plano Republican Rep. Jeff Leach brought the bill to the hearing, he was clear that he wouldn’t let it pass out of committee. “I cannot and will not support, nor will I let come out of this committee any bill on [abortion] which targets the woman with either civil or criminal liability.” Leach had previously agreed to the hearing “in the spirit of creating a culture of life,” according to the Dallas News.

The Republican representative wasn’t alone in his critical opinion of the bill. Kyleen Wright is president of Texans for Life. In an email to The Stream, Wright stated that her group didn’t support the measure. She explained, “Texans for Life does not support any bill on abortion that would penalize women. Penalizing women only protects the abortionist.” She explained:

As a practical matter, one can’t put the abortionist out of business without the help of the woman. There is also the grave concern that women facing penalties of any kind would not seek help in the event of complications, putting her life at risk and further shielding the abortionist.

As a matter of the heart, we know from over four decades of fighting to protect babies from abortion, that you have to save the woman to save the baby. That’s why there are well over 200 pregnancy assistance centers in Texas. Many of these resource centers are staffed by women who were hurt by abortion, hoping to spare their younger sisters the pain of abortion.

Elizabeth Graham’s organization, Texas Right to Life, did not support the bill, either. However, she said in an email that their group is “working closely” with Rep. Tinderholt.

Dickson said it grieved him that Leach wouldn’t allow the bill to leave the committee. “I believe that all people who partake in the death of an innocent child should be held accountable. That’s what the Bible says. I know that we made a valiant stand for the truth, a very historic stand. We’re not finished. We’re going to continue to stand for God’s Word. We’re going to continue to stand for what we know is right. … We’re here to say that abortion is murder.”

Texas Alliance for Life tweeted that it was a “packed room,” and that the “hearing on #HB896 shows deep and broad support for protecting unborn babies from abortion #txlege.” 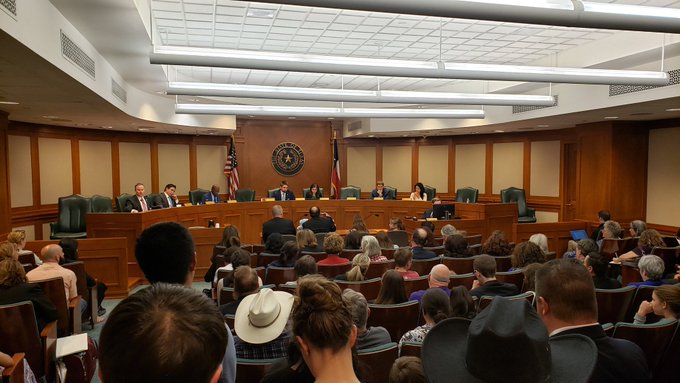