Trump Wants to Save China’s Muslims from Genocide, by Jason Jones

Msgr. Charles Pope: The Importance of the Communal Life As Seen in Two Cartoons This week the State Department’s Morgan Ortegas delivered one of the bravest statements you will ever hear from a government official. She pointed to the “victims of China’s massive campaign of repression against Uighurs and other Muslim ethnic minorities.” The statement continued:

The United States is alarmed by the arbitrary and unjust detention of more than 1 million people; widespread reports of torture and cruel, inhumane, or degrading treatment; ever-present, high-tech surveillance; and coerced practices contrary to people’s faiths. 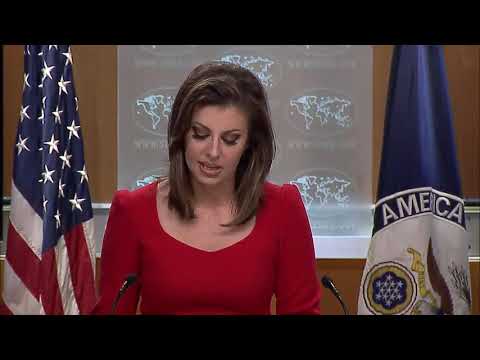 Donald Trump: Champion of the Vulnerable

This powerful statement should be front page news. Everywhere. But you won’t find much about it at USA Today or CNN. As with unborn children, it falls to us as Christians to defend the vulnerable. Ironically, powerful Islamic regimes such as Saudi Arabia do nothing to help China’s Muslims. They put first their business deals with the dictators in Beijing.

The Muslims of China are helpless victims of a vicious atheist regime. It uses forced abortion and concentration camps to punish all believers who resist Communist control. That means Christians, and also Muslims.

The Muslims of China are helpless victims of a vicious atheist regime. It uses forced abortion and concentration camps to punish all believers who resist Communist control. That means Christians, and also Muslims. The hunted Muslims in China, then, really are “the least among us.” If we want to be taken seriously when we call for religious freedom, and claim to be Christ-followers, we must speak up for them, too.

One of the Great Genocides Is Happening Today

How bad is the plight of the Uighur community in Chinese-occupied East Turkistan (Xinjiang)? It’s one the greatest genocides in modern history. And it’s happening today. As you read this.

Don’t take it from me. See the State Department’s 2018 Human Rights Report. The Chinese Communist Party has imprisoned “possibly more than two million Uighurs, ethnic Kazakhs, and other Muslims in internment camps designed to erase religious and ethnic identities.”

Journalists, human rights advocates, and former prisoners all agree. They report that “security officials in the camps abused, tortured, and killed some detainees.” Communist party thugs steal Uighur children from their parents and brainwash them into atheism and Communism.

Some Uighurs have fled to the U.S. and Europe. Even in freedom, they’re haunted by memories. By the thought of their family members still enduring torture, rape, and death in Chinese concentration camps. Or by their own brushes with China’s use of infanticide and abortion as tools of genocide. As I reported here at The Stream a few months back:

One woman, Arzigul Tursun, was detained by police in the sixth month of her third pregnancy. Officials then forced her to undergo a late-term abortion.

Even if she had somehow escaped the medically unnecessary procedure? Then she would have faced a 45,000 yuan fine for the crime of conceiving a third child. That fine exceeds several years’ family income.

As a human rights advocate, a Christian, and a father, let me say “Thank You.” Thank you, Trump administration and State Department. This week’s statement was timely, courageous, and the right thing to do.

I’m all the more grateful when I consider the alternative. One we’ve seen too often: Silence in the face of brutality. Oblivion for the vulnerable. I’m often deeply pained by the dark moments in our history. The times when powerful Americans left the weak to perish, when they needed our solidarity the most.

I think of the spiritless bureaucrats who sat on reports of the Holocaust which Polish Resistance fighters died to spirit out of Europe. For long months, only the Yiddish press would report them. A press briefing finally revealed the Nazi plan in 1942. Our media yawned.

The next day’s New York Times reported [the] news on its tenth page. Throughout the rest of the war, the Times and most other newspapers failed to give prominent and extensive coverage to the Holocaust.

I also remember how FDR’s and his State Department turned away Jewish refugees from Europe. That effectively sent them back to Hitler’s death camps.

I think also of those who ignored reports of the massive suffering inflicted on innocents in the Soviet Gulag. And the celebrities, journalists, and cowardly diplomats who fawned on the monster Joseph Stalin.

Even more recently, officials in the Obama administration long ignored the urgent needs of minorities in the Middle East. They scoffed at the genocidal jihadist group ISIS as a “junior varsity” team. Many in the American media downplayed that too.

America Demands that the Genocide End

I’m grateful that President Trump is proving so much more humane.

This week represents one of the bright moments in our history. It should make Americans proud. The State Department’s statement showed no weakness. It ended with a demand:

The human rights abuses in Xinjiang must end, and they must end now. We call on the Chinese Government to release all Uighurs and other Muslim minorities arbitrarily detained throughout Xinjiang….

This is America showing courage, and calling out tyranny. Standing up for victims. Embracing the incomparable worth and dignity of the human person at the moment when he is most under threat. This is America at its best.

Jason Jones is a Senior Contributor to The Stream. He is a film producer, author, activist and human rights worker. You can follow him at @TGCWithJason.