(January 15th) we mark the legacy of Martin Luther King, Jr. He’s not just some ethnic hero, but a true American one. He is even, in critical ways, a conservative paragon. We’ll lay out why, and draw out what the pro-life movement can — and cannot — learn from King’s success.

King a “conservative”? It seems absurd at first. King sparked massive change in American life. He radically unsettled the existing social order. He rejected calls for “prudence” and “gradual change.” He pointed to abstract principles to condemn concrete arrangements which had seemed to “work,” after a fashion, for 100 years since the Civil War.

His Civil Rights movement, however just its cause, did create a template for a long list of less worthy jihads, on behalf of disgruntled feminists, abortion mongers, and same-sex libertines. On that point, Southern conservatives proved sadly correct: overturning the racial hierarchy in America let a lot of other genies out of the bottle. Some of those spirits are afflicting the black community worse than segregation ever did (i.e., abortion).

No surprise that when King was organizing marches and sit-ins, most of the existing conservative movement opposed him. William F. Buckley and most of the writers at National Review were among them. But Buckley and NR came around as did most Americans. Here’s why:

More than almost any other political leader since Lincoln, King sought to polish the Golden Egg of liberty and equal opportunity, without doing violence to the Goose — that is, America as an orderly nation of laws. Both his arguments and his tactics bear that out.

Arguing for civil rights, King did not appeal to the Marxist dialectic that so many of his allies had accepted. Nor did he latch onto the bastardized and racist pseudo-Islam that Malcolm X was peddling. No, King cited St. Thomas Aquinas and pointed to “natural law” that can overrule any legislation a nation passes — be it the Nuremberg Laws in Germany, or segregation in America. King pointed to the words of our nation’s founders, and called them a “promissory note” to America’s black citizens. And there really was no rational counter-argument to all that. He left his enemies weaponless, except for fire-hoses and truncheons.

Such thuggish means backfired on white supremacists, and turned the nation against them. But that need not have happened. The whole Civil Rights movement could have gone sidewise, and sparked mass civil conflict. That happened in Northern Ireland in the early 1970s, and it could well have happened here. There were three key factors that made the difference:

King knew that one of the key psychological factors that had undergirded white supremacist laws since the days of slavery was fear of mass black violence. For centuries, some states had lived in the uneasy knowledge that in their midst were millions of strong, angry black men with grievances. The slave revolt in Haiti had terrified U.S. slaveholders. Nat Turner’s rebellion led states to outlaw manumission, and crack down on preachers who were teaching slaves how to read the Bible. So King insisted that every one of his activists who would violate unjust laws would not resist any violence. Not by police, and not by white vigilantes. Men underwent hours of training, taking blows and abuse from civil rights organizers, to learn how not to fight back.

This tactic was both principled and brilliant. But there was no guarantee that it would work. There’s nothing magical about non-violence. It doesn’t work in every situation. Gandhi famously made a fool of himself when he counseled Europe’s Jews to apply his non-violent methods against the Nazis. Such tactics can only prevail if two other factors stand in place:

A Nation with a Christian Conscience

In the mid-twentieth century, Britain was still largely Christian. English culture treasured a deep-seated sense of fair play and justice. Gandhi knew that when he confronted its colonial policies. His tactics would not have prevailed against the Germans. Hitler once offered Britain the unsolicited advice that it should “Hang Gandhi,” then every week hang more of his supporters until the Indian independence movement collapsed. No English government could have faced its voters if it had used tactics like that. That was true for one final reason. This factor was key to the success of both the Indian national struggle and the civil rights movement. Most of America was still Christian in some sense in the early 1960s as well.

A Free and Fair Press

Atrocities committed by British commanders were sure to be reported in the British national press. That gave the British public the chance to be outraged and demand a change of course. In the U.S., local Southern papers might have been committed to segregation. But national papers opposed it, and so did national TV and radio networks. They would cover the violence that segregationists and police used against non-violent demonstrators. And that would spark a moral backlash across the country.

With all these pieces in place, the moral violence of segregation would be seen in the public mind for what it was — because it was backed by physical violence. The bogeyman of black men as dangerous potential predators faded away, as dignified young black men in coats and ties patiently suffered abuse, without fighting back. Instead of new Nat Turners, they seemed like images of Christ. And a still-Christian nation began to be ashamed of itself.

What happens when not all these crucial pieces are in place? Non-violent witness can be blunted, or silenced. In the 1980s, thousands of courageous pro-lifers across the country tried, via Operation Rescue, to apply King’s tactics to defending unborn children. They saved some babies, but as a national movement, they failed.

Pro-lifers held sit-ins in abortion mills. They went limp when police arrested them. They chained themselves to the front doors of Planned Parenthood clinics in the ghetto, and handed out leaflets about that group’s racist heritage. When police used violent tactics against old women and teenagers, pro-lifers didn’t resist. We know women whom burly cops subjected to “pain compliance” holds. The cops dislocated 14-year-old girls’ wrists with nun-chucks. In West Hartford, Connecticut and Los Angeles, California, the violence was especially bad — and it was all caught on videotape. 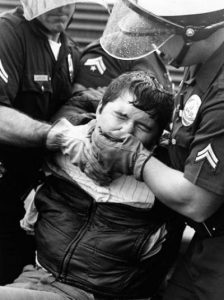 But you would have to watch it at some pro-lifer’s house on a VCR. Because none of that footage was aired. The media were lockstep pro-choice, just as white Southern newspapers had been rabidly segregationist. There were no outside media who could pick up the story. So an epidemic of violence, and punitive jail sentences, against pro-life non-violent demonstrators fell into the memory hole. The movement failed.

Today, pro-lifers make extensive use of alternative, social media. The pro-life stings of James O’ Keefe, Lila Rose, David Daleiden and Sandra Merritt have been seen by millions of people. Students for Life of America, Movie To Movement, and the Susan B. Anthony List have leveraged social media to become enormous, effective movements.

But now these activists face open censorship by those social media platforms. Billion-dollar media corporations once again, as in the 1980s, could shut down a mass non-violent movement for human rights. If these companies get away with this abuse of power, we face the same national shame we would have deserved if Martin Luther King had died, obscure, in some Alabama prison.