What’s Your Back-Up Religion? If LGBT Activists Are Right, Then Christianity is False

VIDEO: Fr. Mark Goring: One of the Most Manly Scriptures

Every week it seems that a new pastor or prominent Christian adopts the LGBT party line. Some are bending like reeds in the wind. They’re convinced that the gale of the Zeitgeist is the breath of the Holy Spirit. Some are indulging in misguided compassion. It’s what the saintly Mother Angelica called the “reigning sin of our age.” They give their gay friends bibles with the offending passages snipped out, in the same spirit they might hand out free, clean needles to addicts.

Others are doubtless confessing heresies which they have long believed, but been too timid to say. Another group are same-sex attracted themselves. Their theological “discoveries” are really just a jump out of the closet. It’s not for me to say. I can’t read souls. Thank God.

Papal advisor and Scorcese-whisperer Father James Martin, SJ, has donned the rainbow sash. Recently handpicked Cardinal Joseph Tobin flaunts it too. So does a long list of high-profile evangelicals. They talk at great length about “compassion,” “welcoming,” and “accompanying the sinner.” It’s all very heartwarming and Christianish. These folks are doing exactly what a secular unbeliever who’d once watched the musical Godspell would think that Jesus might do.

If the LGBT Folks Are Right, Then the Bible Is Wrong

But I don’t see such people mustering “compassion” for Alt-Right white supremacists. Few visit prisons to “accompany” people convicted of hate crimes — or any crimes, for that matter. I don’t hear many calls to “welcome” the arrant souls of the Westboro Baptist Church to a dialogue. No, your typical theological liberal is perfectly willing to judge like the harshest Pharisee — when the sin involved is one that really offends him. When it’s something he actually thinks is … sinful.

Pro-LGBT advocates simply don’t think that same-sex intercourse is wrong. But that’s what the whole Christian tradition, and the whole Jewish tradition before it, taught. This wasn’t some stray belief imposed by the secular world, that the tradition struggled with and transformed before abolishing it, like slavery. Nope. Leviticus taught that sodomy is an abomination and St. Paul said it would keep you out of heaven. No orthodox rabbi, pope, Reformer, or major figure in the whole Judaeo-Christian enterprise thought to say otherwise. For thousands of years. Not until gays hitched their wagon to the civil rights movement, and claimed that having such proclivities was exactly the same as being a racial minority.

So if gay intercourse is right, Christianity is wrong. And not wrong about something minor, secondary, or negotiable. No, sex is fundamental. It’s what put all of us here in the first place. It’s one of our strongest drives. If we’ve been telling people falsehoods about that and threatening them with hellfire for nothing for the whole time our religion has existed, it has zero credibility on any other subject. If the Church can’t get sex right, why would we trust it on politics?

Do the Decent Thing and Disappear

The Mainline Protestant churches and liberal Catholic religious orders have already faced this “fact.” Having embraced the LGBT agenda, those organizations are doing the decent thing and simply disappearing. Within our lifetime, their last sad remnants will have shuffled off the stage, to be forgotten.

So if one agrees with them, one ought to be honest. No more Jesus, no more Yahweh.

So what’s your back-up religion?

This is the fun part. If you buy the whole gay agenda, it’s time to stop picking up fragments of shredded bibles or broken statues in hollowed out shells of churches. That’s just pathetic. Get out there in the marketplace of world religions and find something else that appeals to you. You can figure out later if you can somehow make yourself believe that it’s really true. Anyway, the whole idea of only assenting to a religion because you can affirm it in that sense … that’s really a Jewish-Christian thing. Pagans are much more flexible. Postmodern, if you will.

So here’s my consumer’s guide to alternative religions. It lists the gods I would worship, should I come to agree with Father Martin and Cardinal Tobin, in ascending order of preference. I also offer the pros and cons of each, because picking an outmoded pagan creed to replace Christian faith is a deeply important and personal decision, which should be left between a woman and her reproductive health care provider. Wait a minute, I got confused there. But you know what I mean.

So here are my top five replacement gods. 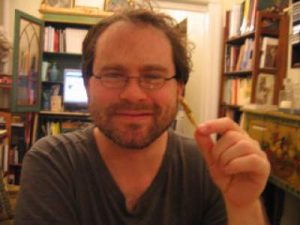 Pros: I know myself fairly well. I can meet my own demands. And when I can’t, I can lower those standards until they’re easy to reach. Yeah, self-worship is a religion that comes with an elastic waistband. And those are really comfy, let me tell you.

Cons: It’s pretty hard, shy of the fourth shot of meszcal, to work up a sense of awe at myself. And the fifth shot always turns that to loathing and Slavic melancholy. That’s a pretty narrow window in which to operate. Not sure this cult has legs.

Pros: This cult does have legs. And gorgeous blue eyes, porcelain skin, with jet black hair. Awe will not be a problem. 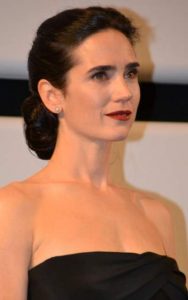 Cons: She’s married to someone else. She’s mortal, and will someday die. If I bring her burnt animal offerings or other sacrifices she will just slap me with a restraining order. (Again.) That makes her too distant and uninvolved a deity, like the “Prime Mover” whom Jefferson reluctantly acknowledged.

Pros: He is the Aztec god of war, placated by human sacrifice. The priests annually choose a young man to be him. He lives like a god, with four wives, the best food, eight slaves, and his every whim catered to. Then the priests kill him and eat him. 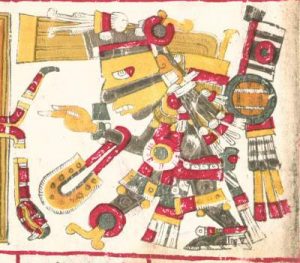 Cons: Like all the other Aztec gods, he depends on human blood for survival. Without regular sacrifices, he’ll fade out and disappear. That’s too needy and fragile for me to really worship. I like a god who can stand on his own.

Pros: He’s funny. He’s flexible. He plays well on college campuses. Even the name his followers picked is fun: “Pastafarian.”

Cons: His services draw the same kind of people as Renaissance Faires: Bizarrely nerdy, veal-white guys and girls who giggle desperately at every joke. The kind of people who learn and speak conversational Elvish. And Klingon.

Pros: He’s big and bad. He kills Frost-Giants for fun. It’s just his hobby. His followers aren’t taken in by open borders, the welfare state, or multiculturalism. 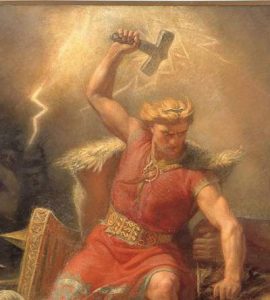 Cons: He’s pretty much an amoral killer. Plus his modern devotees listen to horrible “Death Metal” music. And, you know, are kind of … Nazis. Also, after Ragnarok he and all the other gods will be destroyed, along with all of Creation. So there’s no long-term payoff for worshiping him.

Apparently there’s no really good alternative to the God of Abraham, Isaac, and Jesus. Drat. Sorry, Father Martin. I’m just going to have to stick with my “rigid,” “unfeeling” dogmas. But hey man, you go right ahead. Whatever floats your loafers.