ATLANTA (ChurchMilitant.com) – In the wake of Abp. Wilton Gregory’s installment as new head of the Washington, D.C. archdiocese, a dissident LGBT group in Georgia took out a rainbow-colored ad to thank their former archbishop.

The rainbow-colored ad appeared in the official Atlanta archdiocesan newspaper, placed on behalf of Fortunate and Faithful Families, an organization of “Catholic families affirming their LGBTQ members.” Fortunate and Faithful Families openly dissents from Church teaching on chastity, and associates with other dissident, pro-LGBT organizations like DignityUSA and New Ways Ministry, condemned by the Vatican.

The ad headline reads: “Thank you, Archbishop Gregory!” and the body text in part reads: “For your encouragement … in our mission to keep Catholic families of LGBTQ children together in faith, we will be forever grateful. Our families and faith have been strengthened by your support.” 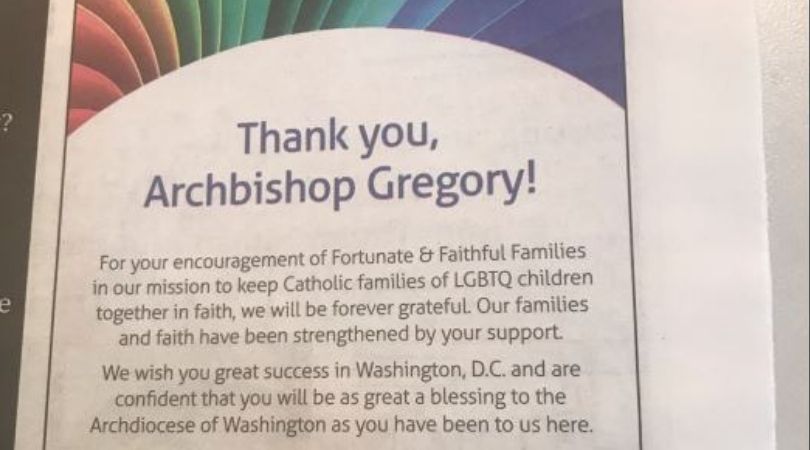 Gregory was installed in Washington on May 21, replacing disgraced Donald Wuerl, who resigned last fall after a Pennsylvania grand jury report revealed Wuerl had protected numerous homosexual predator priests during his tenure as Pittsburgh archbishop. Among Wuerl’s misdeeds was lying multiple times about Theodore McCarrick, the former archbishop credibly accused of sexual predation of seminarians.

Gregory has a long track record of pushing for the normalization of homosexuality. Last month, Church Militant published a story implicating Gregory in returning Fr. Juan Fernando Areiza to priestly ministry in 2013 after removing him for his admitted homosexual affair in 2010.

In 2018, Gregory refused to fire Msgr. Henry Gracz, a priest who attends drag clubs and marches annually in Atlanta’s gay pride parade, for violating Church teaching regarding homosexuality. he defended Gracz using the public statements of Pope Francis on homosexuality. 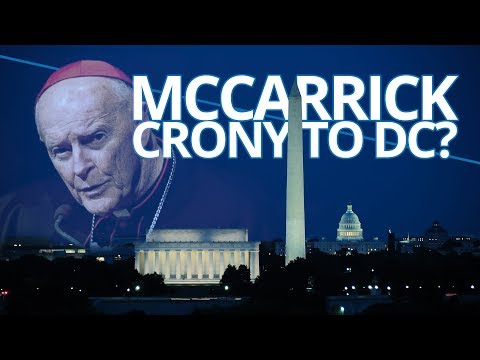 Archbishop Gregory rose to prominence as an auxiliary bishop in Chicago, where he was a protégé of Cdl. Joseph Bernardin, architect of the “seamless garment” approach to Catholic doctrine, which prioritized all social issues equally with abortion. In an early April story, Church Militant noted:

The protege of Chicago’s late Cdl. Joseph Bernardin, who faithful watchdog groups identify as a key individual in building the homosexual network into America’s Catholic Church, is being shifted to Washington.

In 1983, Bernardin consecrated Fr. Wilton Gregory as his 35-year-old auxiliary bishop. Gregory had only been ordained a priest 10 years prior. The Catholic watchdog group Roman Catholic Faithful headed by Stephen Brady has been aware of Bernardin’s key role in the homosexual hive for decades.

As reported by Church Militant, Gregory possesses a long list of disturbing behavior.