Fr. Richard Heilman: This Is a Battle for the Soul of America (Including Video) There is no doubt we are living in troubled times. This, while Godless leaders in our nation have usurped the phrase, “This is a battle for the soul of America,” as they seek to enact laws for unrestricted abortion up to birth; as they refuse to protect life even at birth; as they seek the expansion of euthanasia; as they espouse a complete denial of God’s creation of male and female as based upon biological fact and natural law; as they seek the indoctrination of our children in our schools and libraries; as they seek to remove all of our religious freedoms.

So aggressive is this campaign, that we are seeing very open and hostile verbal, legal and even physical attacks on those who oppose these evils based upon millennia of biblically based religious beliefs. Believers in God’s absolute and undeniable Truth are under attack as never before. No longer is religious persecution something that happens only in other countries; it is being manifested in our own nation.

At the close of his First Inaugural Address, President Abraham Lincoln eloquently proclaimed:

The mystic chords of memory, stretching from every battlefield and patriot grave to every living heart and hearthstone all over this broad land, will yet swell the chorus of the Union, when again touched, as surely they will be, by the better angels of our nature.

Just as in any war, we have choices. The way I see it, there are three primary choices in the face the great expansion of evil in our times:

Where do you stand? More and more faith-filled souls understand that #1 and #2 are simply no longer options. Many have been realizing that evil is rising rapidly around us, and many know we need to do something, anything to counter this infiltration of evil that seems insurmountable.

And so, collectively, we fell to our knees and called out to God. Beginning in 2016, we put out a clarion call to pray the powerfully miraculous 54 Day Rosary Novena. We discovered that it was exactly 54 days from the Feast of the Assumption (August 15) to the Feast of Our Lady of the Rosary (October 7). Since 2016, an enormous army of spiritual warfare warriors has grown to nearly 50,000.

What you can do!

It is very difficult to deny that the heartfelt and believing prayers of this growing Grace Force are being answered in a very significant way. Evil is being exposed, evil is losing its power and, because of this, evil is over-reaching in a state of utter panic.

But, we need to stay the course! We can’t let up! Nearly 50,000 have joined the United States Grace Force. Let’s continue to build our ranks!

St Louis de Montfort is quoted, “When people say the Rosary together, it is far more formidable to the devil, than one said privately. Because in this public prayer, it is an army that is attacking him. He can often overcome the prayer of an individual, but if this prayer is joined to other Christians, the devil has much more trouble in getting the best of it.” 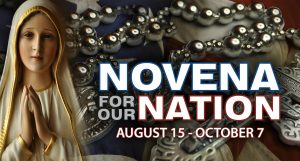 Here’s how it works: By joining the United States Grace Force, you are put on an email list that alerts you to upcoming prayer campaigns, you receive training in holiness and spiritual warfare, you are notified of the new US Grace Force podcasts, you receive special offers of free sacramentals and, especially, you will receive the daily prayers and special training reflections during the great spiritual warfare campaign entitled, Novena for Our Nation, that starts on August 15, 2019.

Also, if you have not yet joined the US Grace Force Facebook group, go HERE

For more information, go to RosaryCoasttoCoast.com

Join the US Grace Force now; build the ranks of prayer warriors from tens of thousands to hundreds of thousands!

YES! THIS IS A BATTLE FOR THE SOUL OF AMERICA!

ENLIST IN THE GRACE FORCE!