Why We Need Dogma

From Hippo to Nashville PHOTO: The state of The Hurricane Lady as she appears now, on display at St. Augustine’s Father Miguel O’Reilly House Museum. CREDIT COURTESY OF JOY BATTEH-FREIHA

A statue that has resided in St. Augustine for more than 150 years may help shed light on the history of some of the First Coast’s earliest residents, and why some believe the area tends to stay unscathed by hurricanes.

As the story has been passed down, “The Hurricane Lady” was discovered in 1850 on a cargo ship traveling from Spain to St. Augustine.

A storm struck the ship, and the captain told the crew to begin throwing cargo overboard to lighten the load, says Carol Lopez-Bradshaw.

“The crew found this crate that the statute stood in and there was no identification on it,” she said.

“So they all knelt down and said a little prayer, ‘if you get us safe to port we’ll give this statue to the first Christian family,’” she said. “The seas subsided, the winds went down and they went into St. Augustine.”

The captain kept his promise, and the statue remains in St. Augustine today.

The statue and images of the statue have become where many focus prayers for safety during hurricane season, especially among St. Augustine’s ethnic Menorcan community.

Lopez-Bradshaw is president of St. Augustine’s Menorcan Cultural Society. The term is used to describe a group of about 1,400 settlers who sailed for Florida in 1768.

The group included French, Italian, Greeks, Corsicans and those from the island of Menorca in the Mediterranean Sea. After nine years on an indigo plantation in what is now New Smyrna, about 600 people from that group eventually settled in St. Augustine.

“Today, St. Augustine and St. Johns County has over 25,000 decedents from these people still living here,” Lopez-Bradshaw said. “The Menorcans are the one group that came to this country, as a group, and has stayed in the same place.”

One of the traditions that has remained is to pray or speak to The Hurricane Lady to ward away storms.
Lopez-Bradshaw keeps the crate where the statue was found in her living room, and every June she places a photo of the statue on her mantle.

“Many people have their own theories of who The Hurricane Lady is, I just know that when the storms come, they don’t come here,” she said.

Through her research on the statue, Lopez-Bradshaw said she believes the statue is based on Menorcan folklore involving a pirate attack on a woman working an island wheat field. In the story of Santa Barbara, the Menorcan patron of fisherman and sailors, the woman is protected when a thundercloud encircles her and lightning strikes the ground to protect her.

“I think that’s the tradition that came over here and became The Hurricane Lady,” she said.

Since 2003 the Hurricane Lady has been on display at the Father Miguel O’Reilly House Museum. The Sisters of St. Joseph, who have maintained the statue since the 1980’s, regard the statue as an image the Virgin Mary. 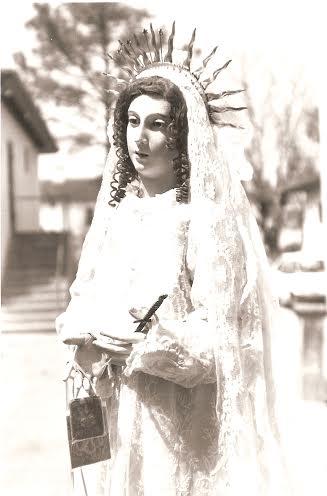 A photo of The Hurricane Lady statue taken in the 1980’s, when she still held what some say is a dagger, and others believe is a gardening tool.
CREDIT COURTESY OF CAROL LOPEZ-BRADSHAW

“We put the faith in prayer,” said museum curator Sister Thomas Joseph McGoldrick. “We pray for safety, and we pray through the Blessed Virgin and the Hurricane Lady is one of the titles of the Blessed Mother.”

“They come when there’s a hurricane coming, especially Menorcans come, because it is a Menorcan statue; it’s a Menorcan devotion,” Sister McGoldrick said. “And they come after to say thank you… to honor the Blessed Mother.”

Notwithstanding the church’s characterization, Bradshaw-Lopez pointed out some original features of the statue that may support the Santa Barbara connection.

“She has a metal halo attached to her head, and it has jagged things, and then it has a little flower,” she said. “To me that represents the lightning strikes and the flowers represent the flowers that come off the wheat.”

She also noted what some have called a dagger in the statue’s hand, which may actually have been a farming tool, and a Star of David pendant that hung on The Hurricane Lady’s neck – items that have not survived the years.

“I think she represented all the people who would be gathered on the Mediterranean Sea,” Bradshaw-Lopez said. “I definitely do believe that she does protect us.”