On Tuesday morning, a subcommittee of the House Judiciary Committee hosted a hearing on abortion rights issues that addressed current controversies from multiple angles.

Organized by the House Democratic majority, the hearing “Threats to Reproductive Rights in America” was called in response to recent state laws that seek to protect lives in the womb by various legislative means.

“Today, abortion is still legal in every state,” stated ACLU lawyer Jennifer Dalven. “These bans [will] be challenged in court and have not taken effect. But the prospect that Roe may be overturned is a very real and very frightening possibility.”

Dalven was one of six expert witnesses who testified in support of expanded and unconstrained abortion rights. Only two pro-life women offered counterpoints, though their testimonies made an impact.

“[For all] the progress black Americans have made, an ache remains in my heart because of the denial of equal protection and due process to another class of people – the baby in the womb,” said Bennett.

“The Roe v. Wade decision [has] rendered 60 million lives unworthy of legal protection and has led to the deaths of over 20 million black babies since 1973.”

Ohden leads the Abortion Survivors Network in Kansas City, Missouri. Late in the hearing, Rep. Ben Cline, R-Va., expressed his appreciation for her presence. “Your life could have been cut short,” he said. 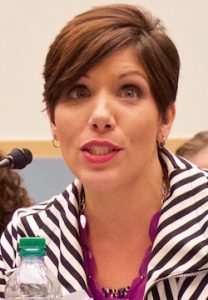 “You [have] acknowledged what the elephant in the room is,” responded Ohden.

“All of these people here today had a privilege that I was not given. That is simply the right to be born, and not to be born accidentally.

“We see this as a political issue, but I have to live with this every single day.”

Today a mother of two, Ohden recounted her harrowing story of being an abortion survivor. Her ministry offers help to those who have faced the pain of similar difficulties.

“My biological mother, I now know, was forced to have this abortion,” said Ohden. “I didn’t find that out until about six years ago. My birth mother is now a huge part of my life [and] a great support.”

She cited a study published in 2015 by The deVeber Institute for Bioethics and Social Research. It revealed that 48 percent of post-abortive women state they were coerced or pressured into the procedure.

“This was not something she wanted,” said Ohden of her mother’s abortion. “I know she is not alone in that.”

“I am a professional actor for over twenty years,” stated Phillips. “I am a mother to two wonderful girls, 10 and 5. I am also [among] the one in four women in this country who have had an abortion.”

She has reached different conclusions on the ethical questions at stake. “My body belongs to me, not the state,” Phillips continued. “Women and their doctors are in the best position to make informed decisions about what is best for them. No one else.”

Meanwhile, Bennett recounted an inexplicable series of events that led to her birth. Her story was fully recounted in the 2017 film Hear from Heaven.

In 1981, her mother walked into a Connecticut hospital fully intending to abort. Unsanitary conditions caused her to walk out within minutes, over the objections of medical staff.

“People should not be pressured like my mom was,” said Bennett. “African American women [are] three times more likely to abort. It’s not because we desire to have abortions more than anyone else.”

Prior to her current position, she served for four years on-staff with a pregnancy resource center in Connecticut.

“It’s because we often feel like we don’t have the resources and support that we need,” added Bennett.

“Things do need to change; we do need help and support in these areas.”

As Bennett testified, her ideological opponents were visibly disturbed. Committee Chairman Jerrold Nadler, D-N.Y., smirked as Bennett told of the degrading treatment her mother faced at an abortion facility.

Bennett had backup in the hearing room. Her husband Sean Bennett was seated behind her.

In another row sat a half-dozen of her close friends with Bound4LIFE International, an evangelical ministry centered on prayer and pro-life advocacy. (Disclosure: the author worked on-staff with Bound4LIFE for two years.)

“We sat in the subcommittee hearing to pray for the lawmakers listening to her powerful testimony,” stated Bound4LIFE executive director Matt Lockett via email.

“Christina began her pro-life work nearly 15 years ago as part of Bound4LIFE. She went on to help lead our work at the state level in Georgia.

“Today, Christina has a story to tell, and she has key insights that are necessary for the nation to move forward.”

Bound4LIFE has long been known for its visually striking faith-based advocacy. Young adults pray silently at the Supreme Court for federal judges and other government leaders. They stick red tape over their mouths with the word “life” handwritten in black.

Since the ministry’s founding in 2004, their evolving team has consistently prayed weekly at the high court.

Bennett notes it was no accident that she wore a bright red jumpsuit to the hearing, though she was surprised when Ohden showed up also wearing one.

“I bought one because it made me think of the red Life Tape,” she stated via email. “I wanted to be a walking piece of red tape in a symbolic way.” 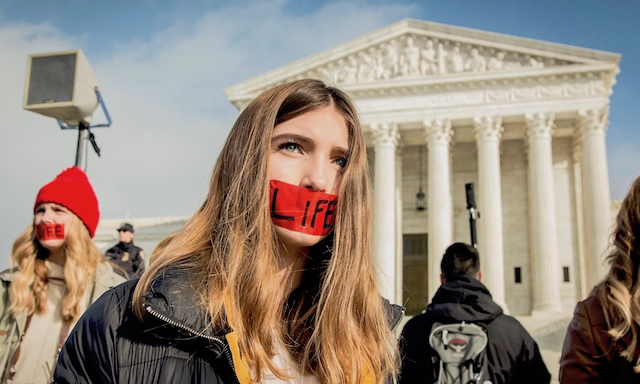 Several women and men stand outside the U.S. Supreme Court in prayer on January 18, 2019 during the 46th annual March for Life. (Photo: Courtesy of Bound4LIFE)

“The Commonwealth of Virginia is ground zero right now in the fight over late-term abortions,” said Rep. Cline. He referenced a recent Virginia bill backed by Democratic Governor Ralph Northam. He stated it would legalize potentially ending an infant’s life past the point of birth.

Cline turned to other states’ policies. “The chairman [discussed] states endeavoring to pass pro-life measures like Mississippi,” he said. “[Yet] we only need to look at his home state of New York to see how extreme these laws have gotten. The bill recently signed into law by Governor Cuomo allows abortion on demand up to the moment of birth.”

Lockett contends prayer has played a role in the wave of state pro-life laws. He stays in contact with dozens of Bound4LIFE chapter leaders across the U.S. These faith-based advocates marshal Christian believers to pray outside state and federal courts, as well as local abortion facilities.

“In many cases, our local leaders have prayed and mobilized in their states long before actual bills have been introduced,” stated Lockett via email.

He points to Missouri’s pro-life bill, signed into law on May 24, as a recent example.

In Missouri, an early-morning prayer meeting coincided with the pro-life bill’s final Senate vote at 4:01am.

For nine years, Bound4LIFE leaders Jeremy and Melissa Jacobs have led pro-life prayer meetings in St. Louis. She shared in a recent post how their early-morning prayer coincided with the bill’s final Senate vote at 4:01am.

“Some local leaders enjoy close connections with lawmakers, which provides even greater insights for prayer,” he adds. “As opportunities arise, we elevate those efforts to become a focus of prayer among the entire network.”

Hope for the Future

In closing, Melissa Ohden addressed witnesses on the other side of the debate. She suggested perhaps there was more common ground than seemed evident.

“We all have differing experiences and differing opinions, but we are passionate about serving women,” she said.

Her network of nearly 300 abortion survivors continues to grow, as more people become willing to share their stories. Ohden stated her personal commitment to speaking on behalf of lives in the womb.

“People should not feel like they have to choose abortion because they don’t have the resources [to] take care of their families,” said Bennett. “A lot has to change in order for us to truly be able to have equality in this country, and not be targeted for our lack of resources or who we are.”

Her friend Lockett, whom Bennett often speaks alongside at events nationwide, offered his perspective on why their shared pro-life stance prevailed at the House hearing.

“Christina Bennett is what the modern pro-life movement looks like,” stated the prayer leader. “It is young. It is pro-woman. It is pro-science. It is informed and compassionate.”

Watch the entire House hearing below. Explore The Stream’s complete coverage of human life issues, and sign up to receive top stories every week. 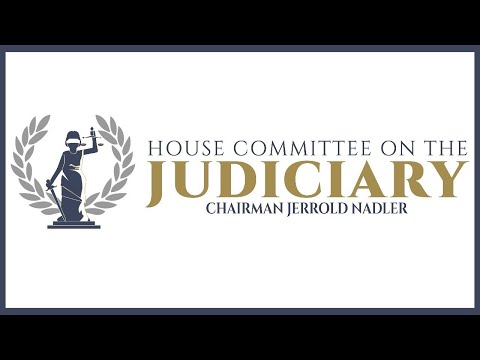 Josh M. Shepherd covers culture, faith, and public policy issues as a Contributor to The Stream. He has served on staff at Focus on the Family, The Heritage Foundation, Bound4LIFE International, and two Congressional offices. His articles have appeared in media outlets including Christianity Today, The Daily Signal, The Federalist, Boundless, Religion & Politics, and Christian Headlines. A graduate of the University of Colorado, Josh and his wife live in the Washington, D.C. area with their son.