Mark Shea: Why Creeds? The Danger of Making the Church a Club By Jennifer Hartline, a Senior Contributor, The Stream, April 21, 2018

If you still think tolerance is the desired goal of the new sexual regime in America, you are living in Fantasyland. Three recent news stories illustrate the fact that tolerance is a ruse. You. Must. Approve.

First, Dan Piepenbring’s whiny piece in The New Yorker about Chick-Fil-A. Like the entire “LGBTQ” agenda, he depends on the accusations of bigotry and homophobia. Let’s unpack this dishonest “homophobia” term. It’s flung at people as though it were a shameful scarlet letter. It distracts from the real target by hitting a fake one.

As a Christian, I have a healthy fear of sin. Sin is the death of my body and soul, so it behooves me to fear its destructive power and avoid it. The Scriptures, all of Christian tradition, and the natural law clearly teach that homosexual sex is objectively disordered and a sinful, harmful misuse of our sexual faculties. It is quite sensible then to have a proper fear of homosexuality, the same way I have a proper fear of all sexual sin.

The accusation, of course, is that anyone who doesn’t embrace homosexuality as a good thing is irrationally afraid of gay people. That’s homophobia. Hence it’s scary scarlet letter power.

Reasonable people know it is healthy to have some fear of destructive behaviors. Christians ought to know that sin is nothing to be trifled with. And it’s not our prerogative to say this or that sin is no longer sinful.

But reason is unwelcome here. So are distinctions between the person and the actions. According to Piepenbring and the “homophobia” choir, if you object to the behavior or the lifestyle, you’re afraid of the person. Not just afraid — you’re a lousy bigot.

Accommodation is Not Enough

Next comes the news that an Army chaplain is being disciplined for declining to lead a marriage retreat that included a same-sex couple. A lesbian soldier filed a complaint against the chaplain, even though she and her partner attended the retreat without incident. The chaplain, Jerry Squires, rescheduled the retreat in order to allow another chaplain to preside and thereby accommodate the same-sex couple. The rescheduling meant that some of the heterosexual couples were no longer able to attend. But no matter.

“Evil cannot bear the counter-witness of truth. It cannot co-exist peacefully with goodness, because evil insists on being seen as right and worshiped as being right.” — Archbishop Charles Chaput

Still, it wasn’t enough. The chaplain had the nerve to refuse to deny his faith, and so he must be punished. Squires made sure things were rearranged to serve the same-sex couple, but still this Christian chaplain must be made to pay for his unwillingness to bow before the homosexual altar.

We Will Have Your Children

Finally, there’s the memo out of Orange County in California. See for yourself. 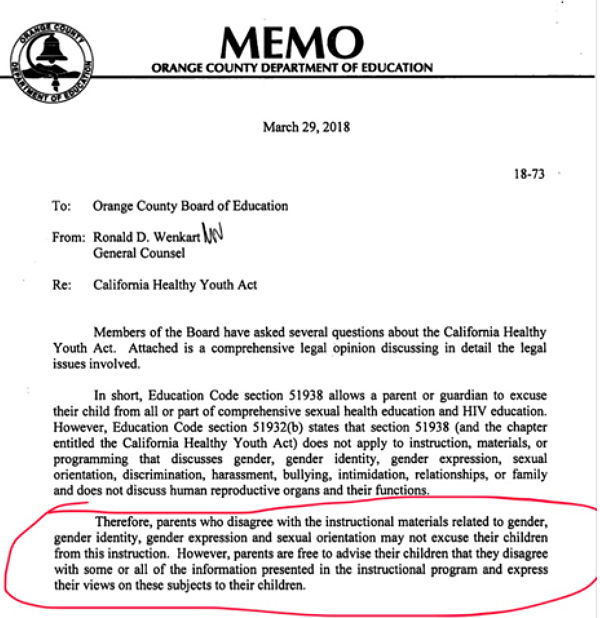 My, how generous of the Eminences of Education Indoctrination to deign that parents can still “advise their children” on matters of gender, gender identity, sexual orientation and such. They can’t prevent the State from “instructing” their children according to the dictates of “LGBTQIxyz”, however. They have no right to opt-out of this mandatory programming. They can only “advise” their children that Mom and Dad “disagree” with the State.

Tolerance is Not a Virtue

This is the intolerant regime that runs around screaming about tolerance, acceptance, love, and equality. This is the totalitarian madness that says the price for refusing them is your livelihood, your business, your home, your reputation, and whatever else you have. You will be punished and made to submit to “reprogramming” until you heel. If you still refuse, you will be crushed.

This is the regime that demands to have control of your children. The young ones will be formed to accept the madness as right and good. They will learn to reject and even permanently harm their physical bodies and believe only in feelings. They will be shamed out of their right reason until they submit. Parents, shut up and fall in line.

Evil talks about tolerance when it’s weak. When it’s strong, real tolerance gets kicked out the door. This in turn explains a lot about our current cultural climate. To put it simply — evil cannot bear the counter-witness of truth. It cannot co-exist peacefully with goodness, because evil insists on being seen as right and worshiped as being right. Therefore, the good must be made to seem hateful and wrong.

I think America has been persuaded that tolerance is the supreme virtue, but it is not so. Charity, prudence, justice, mercy, honesty, chastity — these are true virtues. Fidelity to God’s laws about marriage and sexual conduct is not intolerance. It’s the only choice befitting believers.