Trump Vows to Have SOTU in ‘Alternative’ Location, by Fred Lucas President Donald Trump talks to reporters during a meeting with Heritage Foundation President Kay Coles James and other conservative leaders and members of his administration in the White House on Jan. 23. (Photo: Chip Somodevilla/Getty Images)

President Donald Trump said he would deliver the State of the Union in an “alternative” location after House Speaker Nancy Pelosi said he would not be welcome in the House, the traditional venue.

Heritage Foundation President Kay Coles James, as part of a meeting of conservative leaders, told the president he was welcome to hold it at The Heritage Foundation, located near Capitol Hill, according to a Politico reporter. James was sitting to the president’s left during the meeting.

“If we can handle Iraq, we can handle the middle of Washington and a very, very spectacular building in a beautiful room that we should be in and that’s where it’s been for a very long time,” Trump said, referring to his December trip to Iran. “So it’s a sad thing for our country. We’ll do something in the alternative. I’ll be talking to you about that at a later date.”

Pelosi, D-Calif., informed Trump earlier Wednesday that the House will not be open to the State of the Union until the government shutdown ends.

She later tweeted: “This afternoon, I sent @realDonaldTrump a letter informing him that the House will not consider a concurrent resolution authorizing the president’s State of the Union address in the House Chamber until government has opened.” 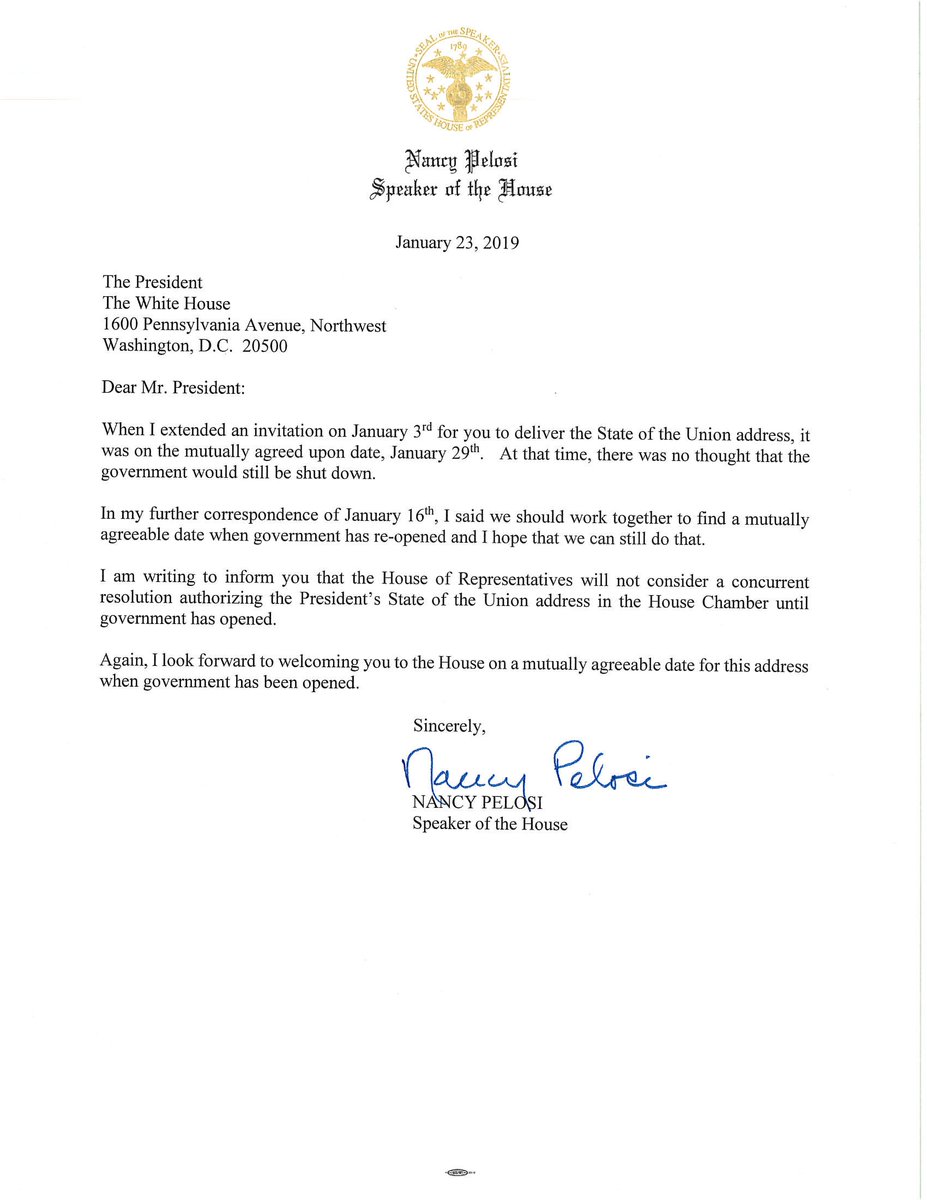 This afternoon, I sent @realDonaldTrump a letter informing him that the House will not consider a concurrent resolution authorizing the President’s State of the Union address in the House Chamber until government has opened. https://goo.gl/oi5mT4

Trump talked about the snub at length during a meeting with conservatives about his immigration proposal.

“So Nancy Pelosi, knowing these facts, and knowing it’s something she can’t win, she just went out and said let’s cancel, for the first time in the history of our country, let’s cancel the State of the Union address,” Trump said. “And it’s a disgrace.”

Trump added that Pelosi is wrong to contend there was a security issue with the House of Representatives.

Trump also said during the meeting: